Success for students and researchers at global level

Researchers from the School of Mechanical Engineering have taken a record-breaking number of awards at this year’s Graphical System Design Achievement Awards, run by National Instruments(NI) in Texas. 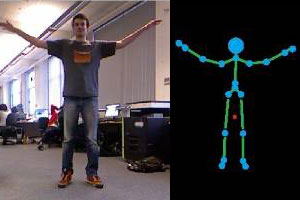 One of the teams, comprised of students Chris Norman, Dominic Clark and Barnaby Cotter, won the Student Design Showcase for their Kinesthesia toolkit. The toolkit merged Microsoft's revolutionary gaming technology Kinect with NI's LabVIEW to develop a series of motion-tracking tools and programs with potential application in areas such as stroke rehabilitation and surgical assistance.

Another team of researchers, led by Dr David Keeling, won three awards for its design of a heart simulator, used to test an artificial "muscle wrap" supporting a failing heart by squeezing it in time with the body's own muscle.  The simulator was designed with the ability to replicate different patient groups, illnesses and animal models, giving it the potential to reduce the need for animal testing.

The team took the Life Sciences Award, the Humanitarian Award and the overall Application of the Year Award beating high profile company Siemens and many other top global universities.

Professor Levesley, Director of Student Education for Mechanical Engineering who acted as a supervisor to both teams and was at the awards ceremony in Texas said: “It was one of the proudest moments of my career, and shows perfectly how the impact of our teaching and research is being recognised on a truly global stage.”

Watch the team and more demos of NI week