Malcolm Dawson, the University's Security Operations Manager, has been selected as a finalist in this year’s Security Excellence Awards, to be held at London's Hilton Hotel. 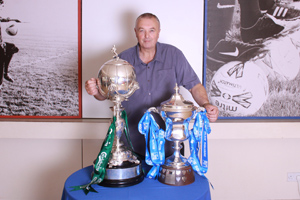 The annual awards programme is designed to raise the profile of the security industry, whilst recognising and honouring the achievements of individuals in each category who have made a significant contribution to the security market through excellence and outstanding service.

Highly prestigious, the awards are greatly sought after in the profession for promoting the very highest of standards and to be selected as a finalist in itself is a huge achievement.  Malcolm has been nominated for the In-House Security Manager of the Year category and will find out if he has won at an awards ceremony on 17 October.

Malcolm said: " I am so thrilled at reaching the short list which is great, because it covers all members of the security industry across the country, not just those in higher education. I am up against some strong candidates from Wales, London and Holyhead to name a few and I am just so pleased to be in such company".

Further congratulations are in order for Malcolm, in that he was recently invited by the York City Football Club Board of Directors, to become a Vice-President of York City for the forthcoming 2012/2013 season.  The position was created within the structure of the football club in 1980, and is now regarded as an integral part of the organisation.

On invitation to his new role Malcolm said: "I am absolutely delighted, privileged and honoured to be associated with York City Football Club as a Vice President.  York is a fabulous community football club run superbly by a board of directors who, like their fans, are passionate about the club. The team are currently on a high after winning the FA Trophy and Play Off Final at Wembley in May which has cemented their return to the Football League and with a new stadium to look forward to things are certainly on the up".