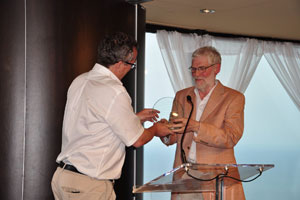 The award was presented to Andrew at the 14th triennial IATBR conference, held in Toronto last week. This is a highly prestigious award, previously given to Frank Koppelman, Ryuichi Kitamura, Moshe Ben-Akiva and David Hensher. Andrew was honoured jointly with Juan de Dios Ortúzar.

Andrew is a Research Professor at the Institute for Transport Studies in Leeds as well as being a Senior Research Fellow at RAND Europe. He is also the author of the widely-used ALOGIT software, which became available in 1986. Andrew has been active in the field of travel behaviour research for forty years, with key contributions throughout this period.

In the early 1970s, Andrew published one of the three key papers generally credited with developing the theoretical basis of the nested logit model. He was also responsible for arguably the first application of sample enumeration, and as early as 1975 estimated a random parameters model for VOT estimation. Following a stint at Cambridge Systematics, Andrew set up Hague Consulting Group (HCG) in 1985 and led it with Hugh Gunn, Eric Kroes and Moshe Ben-Akiva. The contribution made by HCG in its fifteen years of existence cannot be overstated. With his colleagues at HCG, Andrew influenced modelling practice over a wide area, developed models and software extending the state of the art and practice.

Andrew’s academic role was expanded significantly when he was appointed as a Research Professor in the Institute for Transport Studies at the University of Leeds in 1997. In this role, he worked extensively with a number of staff in Leeds, as well as starting international collaborations, for example with Michel Bierlaire and Kenneth Train. He played a leading role in setting up the International Choice Modelling Conference, and is at the forefront of recent advanced modelling projects, including the development of a first activity based model in Europe and a long distance model for the US. Over these fourteen years, Andrew has made contributions in terms of model structure, model specification and interpretation.

Despite only spending approximately five per cent of his career in academia, Andrew has published very widely, with numerous highly influential journal papers and a very large number of key conference contributions.