Honorary doctorates awarded by the University

The former Director General of MI5, Britain’s top prosecutor and an acclaimed historian have been honoured by the University of Leeds. 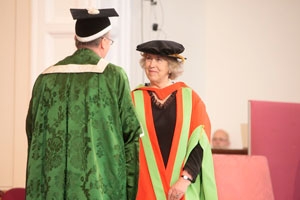 An Honorary Doctorate of Laws was awarded to Baroness Eliza Manningham-Buller, Director General of M15 between 2002 and 2007 and expert in counter-terrorism. Keir Starmer QC also received an Honorary Doctorate of Laws. Named Human Rights Lawyer of the Year in 2001 and QC of the Year in Human Rights and Public Law in 2007, he has earned a reputation as one of the best lawyers in the country and took the role of Director of Public Prosecutions in 2008.

Sir Ian Kershaw, academic and historian, received an Honorary Doctorate of Letters in recognition of his contribution to his field of German history.

Also awarded an Honorary Doctorate of Laws was Baroness Onora O’Neill, professor of philosophy at the University of Cambridge and chair of the Nuffield Foundation.