The last two live performances of Steve Bottoms' 'Red Route' tour will take place on Friday 29 and Saturday 30 June 2012. The tour is, however, now available as a free mp3 download. 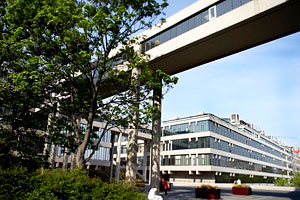 Red Route is a site-specific performance tour in the form of an audio download, created as an unofficial guide to one of the University of Leeds’s most notable architectural features. The Red Route corridor – allegedly “the longest in Europe” when first built – forms the spine of a complex of brutalist, concrete buildings constructed in the 1960s as the centrepiece of the University’s expansionist Development Plan.

Red Route is a story of grand architectural visions, funding cuts, and the persistence of trees. It is the download version of a live performance – Line of Sight – that was originally devised for presentation as part of Leeds’ Light Night celebrations.

There will be two last-and-final live presentations of the piece on Friday 29 June and Saturday 30 June, at 11.15pm, as part of the Performance Studies International conference being staged by the School of Performance and Cultural Industries. Spectators should assemble in the stage@leeds foyer.