University is lead partner in week-long festival of performing arts

The LUDUS Festival Leeds, in which the University is a lead partner, begins its exciting programme of performing arts events on 25 June. 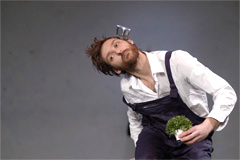 With 13 events over 7 days audiences will be able to experience some of the most exciting artistic work available today right on their doorstep.

The programme includes delights such as Lo Monstre, an enchanting animatronic creature which will be visiting the city centre (Fri 29 June, Sat 30 June, Sun 1 July), whilst at West Yorkshire Playhouse you can become part of the performance in Ontroerend Goed's Audience, which makes its Leeds premiere direct from a sell-out Edinburgh season and European tour.  The festival has also commissioned a City Walk, where a network of Yorkshire artists will guide audiences to take a fresh look at the streets.

On the opening night of the festival, Promised Land, a stage adaptation of Antony Clavane's book - takes centre stage.  Promised Land tells the story of Leeds, its football club and its communities through the eyes of Nathan and Caitlin, two young idealists growing up in mid-1970s Leeds, living in the same city but on opposite sides of a cultural and religious divide.

Mick Wallis, Professor of Performance and Culture at the University of Leeds, and Co- Director of Ludus Festival Leeds said:

"The city of Leeds has a long history of producing and presenting high quality performing arts.  This inaugural Ludus Festival, a new venture in contemporary performing arts for the city, celebrates Leeds as an international centre of excellence in theatre and performance.  And more importantly, it presents a fresh and dynamic programme for Leeds residents and visitors to enjoy.

Ultimately Ludus is about taking the opportunity to try something new - for venues, for audiences, for the city.  The name 'Ludus' refers to play and we have programmed work that will engage audiences in a playful way.  We invite everyone to come along and prepare to be surprised, amazed, pleased and provoked."