Six chosen to be Olympic torchbearers

Five students and one staff member from Leeds are part of the 8,000 inspiring torchbearers chosen to carry the Olympic torch this summer. 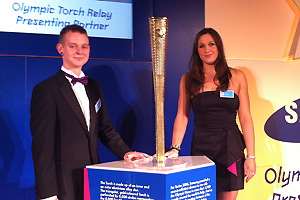 London 2012 has confirmed individual Torchbearers for the Olympic Torch relay and the street route that the Olympic Flame will take throughout its 70-day UK relay.

The relay comes to Leeds on 24 and 25 June, with a major evening celebration planned in Temple Newsam on Sunday 24 June.  As the street-level route shows, the relay will pass close to the University when it travels through Kirkstall, Headingley and Meanwood.

Our University Torchbearers will run on a range of dates and locations and we will follow their journey over the coming months.

Stewart, Chris and Rachel were all chosen by the University through a partnership with Torch Relay sponsor Samsung.  Their selection followed a cross-campus nomination process that enabled staff and students to nominate inspirational members of the University community.

Rachel was nominated having won 10 medals at BUCS University swimming championships during her three years at University, a feat that no other Leeds swimmer has achieved even once in the same period.  She said "I feel very honoured to have been selected for such a unique experience in the lead up to the Olympics.  I am very grateful to those who gave me this opportunity but rather nervous about running with the torch; I should really be swimming with it!"

Seb, who was chosen after applying to Coca-Cola's Future Flames campaign, commented: "I have been glued to every Olympics since the age of 10 and never thought that I would be one of the few individuals to run with the Olympic torch.  In my eyes it is the most iconic object linked with the Olympics and I am still shocked and honoured to be able to run with the torch.  I just hope I don't trip up!"

Sasha received her nomination through Lloyds TSB Local Hero programme and is a England junior international in Trampoline.  After receiving confirmation of her role as a a torchbearer, Sasha said "I'm unbelievably excited about running with the torch, it really will be a once in a lifetime opportunity and it was a privilege to be selected.  I'm counting down the days until my moment in the spotlight!"

On average there will be 115 people running with the torch on each day of the relay, taking responsibility for the Olympic Flame for 300m.  Each torchbearer will have their own torch and uniform for the relay.

Further information on the torch relay can be found on the London 2012 website and details on how the torch will travel through Leeds can be seen here 24 June route and 25 June route.