Dr Bridget Wade of the School of Earth and Environment at the University of Leeds has been awarded the prestigious Wollaston Fund, presented by the Geological Society, London. 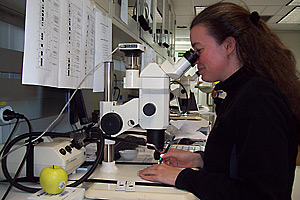 The fund has been awarded since 1831 to contributors to the Earth sciences under the age of 40 on the basis on noteworthy published research. Not unlike William 'strata' Smith, the first awardee of the Wollaston Fund, Dr Wade uses fossils to identify different time intervals in the Earth's past.

Dr Wade studies changes in patterns of evolution and extinction, ancient marine temperatures, global ice volume and sea level fluctuations for the last 40 million years using microfossils and their chemistry. Her research has been international in scope, involving field expeditions in Europe, Africa, the Caribbean/Gulf of Mexico, as well as participation on ocean research expeditions in the Pacific and Indian Oceans.

The current focus of her work is the Oligocene epoch (~34-23 million years ago) when the Earth's warm period ended and the Antarctic ice sheet was established. She is helping build an accurate picture of how the climate and biota responded and is addressing the role of Antarctica in large-scale climate variability.

The Wollaston Fund is the latest of several awards Dr Wade has won. In 2008 she was given the Hodson Award by the Palaeontological Association for a "palaeontologist that has made an outstanding achievement in contributing to the science through a portfolio of original published research" and The Micropalaeontological Society Alan Higgins Award in 2011 "in recognition of significant achievement in the field as documented by publications, leadership or educational activities".

Dr Wade joined the School of Earth and Environment in 2010 and her research is funded by the National Environment Research Council (NERC).