'Celebrating the Games' series comes to an inspiring finish

Two inspiring lectures at Leeds next week will bring our ‘Celebrating the Games’ series to a motivational finish. 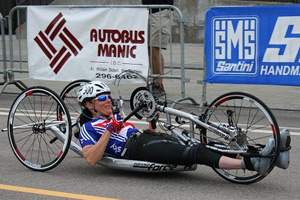 Karen Darke will talk about her journey to the Paralympic Games, and Deborah Hale will talk about the challenge of planning a route for the Olympic Torch Relay which will come within ten miles of 95 percent of people in the UK and involve 8,000 torch bearers.

Karen Darke, adventurer, paralympic hand-cyclist, and Leeds graduate, has a very personal and inspiring story which has resulted in her dedicating her life to becoming a Paralympic athlete. After a devastating climbing accident at a young age Karen was told that she would never walk again, but this did not stop her. The adventurous character has completed numerous physically exhausting and life-threatening challenges including hand-biking the length of Japan, sit-skiing across Greenland, sea kayaking in Patagonia and many more impressive achievements.

After watching the 2008 Paralympic Games on television, Karen has now dedicated her life to compete in the 2012 Olympic Games and is now a member of the British Hand Cycling team. In 2011 she qualified for London 2012 after winning double bronze at the World Championships.  Alongside her cycling career Karen is also UK Paratriathlon Champion and aims to become the first paraplegic women to complete a full iron man triathlon.

Read more information about Karen and her achievements.

Karen will be talking:

As the London 2012 Olympic Torch Relay producer, Deborah Hale has one of the most important jobs in the run up to the Opening Ceremony of the London 2012 Olympic Games. She will finish the Celebrating the Games Olympic Lecture Series by talking us through the Torch Relay and the testing job of deciding the route for the flame to travel. The Torch Relay route has been planned so that the Flame will come within ten miles of 95 percent of people in the UK, all venues and entertainment for the flame event have now been confirmed. The torch relay will tour throughout Great Britain starting on 17 May and travelling across the UK for 70 days before finally arriving in London on 27 July for the Opening Ceremony. The torch will be held by over 8000 torchbearers on its journey to the Olympic Stadium.

Read more about the Torch Relay.

Deborah will be talking:

In:  Venue to be confirmed (please keep checking this page)