Celebrating the Games - optimising performance of the mind

Dr Steve Peters, psychiatrist and medical officer for Team GB Cycling will be talking at Leeds on 1 March about how he has manipulated the human mind for his athletes to achieve great things. 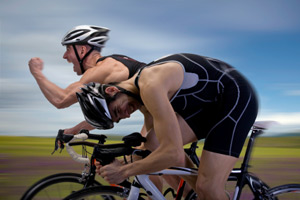 Dr Peters plays a vital role in the making of Team GB Cycling and made massive contributions to GB achieving eight cycling gold medals at the 2008 Beijing Olympics. As a Consultant Psychiatrist working full time in Elite Sport, Steve is resident with the British Cycling Team, Team Sky and within the English Institute of Sport.

Steve has strongly influenced the careers of many elite athletes including quintuple junior swimming gold medalist Lizzie Simmonds, the UK's taekwondo No1, Sarah Stevenson, an Olympic judo qualifier in Karina Bryant, and the Olympic bronze medalist pentathlete Georgina Harland. Having initially become involved with British Cycling in 2001, Steve now works with riders, coaches and the staff team ensuring every rider has an individual approach and plan for success in the future.

Steve will be talking: