Alumni and staff members past and present have been recognised in the New Year's Honours list. 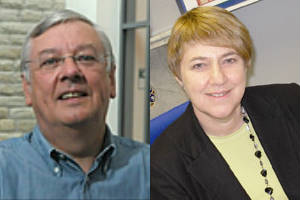 Peter Buckley, Professor of International Business, receives an OBE and Dr Kath Hodgson, Director of Learning and Teaching Support, receives an MBE. Tom Worsley, Visiting Research Fellow in the Institute of Transport Studies, receives a CBE for his services to the UK Department for Transport.

Professor Buckley is Director of the Centre for International Business (CIBUL) and is recognised as a world-authority on international business. He has written 22 books, and has held visiting Professorships in universities around the world. In 1998 he was awarded an Honorary Professorship at the University of International Business and Economics (UIBE) in China. In 2010 he was awarded Honorary Doctorate by Sweden's University of Uppsala and the same year he received the prestigious Cheung Kong Scholar Chair Professorship at UIBE.

Dr Hodgson is a graduate of Leeds three times over, having completed all her higher-education qualifications (Cert Ed, MEd, PhD) at the university. After teaching middle school children for 20 years, she began working in the University's Planning Office in 1992 before moving into a learning and teaching role and going on to become head of the Teaching Quality Assurance Unit in 1998. Dr Hodgson was awarded a University Fellowship for her outstanding contribution to teaching and student learning in 2005.

Tom Worsley retired from the Department for Transport in May 2011, having held a number of senior economist posts during an impressive career.  He was responsible for setting up NATA (the New Approach To Appraisal) in 1997 and for the development of the Department's National Transport Model in 2001.  He led the team responsible for Network Modelling Framework, a forecasting model used to provide the evidence to inform the 2007 Rail White Paper and High Level Output Specification.  Since joining ITS his research interests have included an OECD discussion paper on the Crossrail scheme.

Acclaimed poet and former member of staff Geoffrey Hill receives a knighthood, as does alumnus and former staff member Professor Christopher Snowden, now Vice-Chancellor of the University of Surrey. Geoffrey Hill joined Leeds' English department after graduating from Oxford in 1953. He worked at Leeds until 1980 and it was during this time that he wrote and published some of his most admired poetry, including King Log, Mercian Hymns and Tenebrae. In 2009, the University acquired Hill's comprehensive archive.

Professor Snowden graduated from Leeds in 1977 and completed his PhD at Leeds while working in industry. He held the personal Chair of Microwave Engineering at the University from 1992 to 2005 and was Head of the School of Electronic and Electrical Engineering from 1995 to 1998. He was the founder and first Director of the Institute of Microwaves and Photonics located at Leeds.

Dr Andrew Minchener (Chemistry 1974, DSc 1998) has received an OBE for his services to international science and to clean energy collaboration with China.
Posted in: University news
Email Tweet Like LinkedIn