The genius of Michael Faraday

Sir John Meurig Thomas will be the guest speaker at the prestigious Stoner Colloquium on Thursday 23 February 2012. He will talk about 'The Genius of Michael Faraday'. 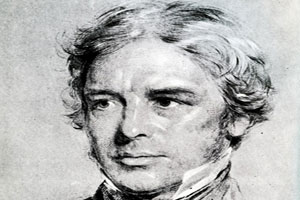 Lord Rutherford said of Michael Faraday that he was one of the greatest experimenters ever; Albert Einstein believed that Faraday was responsible for the greatest change in the intellectual structure of physics since Newton.  How could a man who left school at thirteen to become an errand boy, who never attended university and knew no mathematics, reach such pinnacles?  Sir John Meurig Thomas will endeavour to answer this question in his talk, 'The Genius of Michael Faraday'.

Sir John once held the chair of chemistry created for Michael Faraday at the Royal Institution of Great Britain, of which he was the director from 1986 to 1991.  He was Head of the Department of Physical Cemistry at the University of Cambridge from 1978 to 1996 and is now Honorary Professor at the Department of Materials Science and Metallurgy, Cambridge.

The talk is open to all and is free.  It will take place:

Please email Rosie Corbin if you would like to attend.

Read more about this event and about the Stoner Colloquia.