Dame Nicola Brewer, the British High Commissioner to South Africa, is returning to Leeds on 15 October to give the annual alumni lecture. 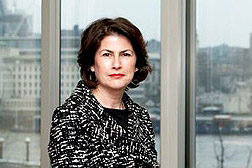 When she was a Leeds student, Nicola Brewer (English 1980, Linguistics and Phonetics PhD 1988, Hon LLD 2009) wrote an essay on Henry James's novel The Ambassadors. She went on to represent the Foreign and Commonwealth Office from Paris to New Delhi, was Chief Executive of the UK Equality and Human Rights Commission, and since 2009 has been British High Commissioner to South Africa.  Nicola will give an insider's account of the challenges and rewards of a diplomatic life.

Her lecture, "From Leeds to Pretoria: Diplomacy, Development and Diversity" will be given:

The lecture, which is free to attend, will be followed by a three-course lunch:

The lunch will cost £30 per person.