Matthew is a mechanical engineer working in the School of Chemistry building bespoke apparatus. He works with aluminium, steel, Teflon, and bikes, although the latter is (mostly) in his spare time.

I’ve always been quite mechanically minded and hands-on, so becoming a mechanical engineer just seemed to make sense. As a kid I was always getting stuck in, making things and fixing things on my bike. Living in Scarborough, there was always tonnes of cycling to do as you were only fifteen minutes away from lots of good places for a ride. Every night after school we’d meet at half seven in Safeway carpark. It was guaranteed there was someone about to go for a ride, BMXing or mountain biking in the woods or on the sea front.

When I was sixteen, I was weighing up my choices between sixth form or something vocational. The idea of going down the vocational route was more appealing than doing some A-levels that I might not be 100 percent into. I did the advanced modern apprenticeship and spent two days a week at college training. They were long days but it was good to be studying and getting paid for it as well. The wage was not much as an apprentice, but it was more than your mates at sixth-form were getting.

In the other three days a week I worked at Schneider Electric, a big multinational manufacturing company. We made feeder pillars and switching gear for power distribution - high voltage stuff. It was a great place to do my apprenticeship because the work was so varied. We did everything from sheet metal work, copper work, using big CNC machines, running paint lines, working with the maintenance teams, and working with the inspection team. I even spent time with the shipping department - I literally experienced every aspect of the factory.

When I finished the apprenticeship, they gave me a job in the offices doing tendering and design. It didn’t involve as much design as I’d have liked but more tendering and sales, so I started looking at other jobs. I was twenty at that point and a few of my mates had moved to Leeds so I started looking in Leeds. I found a job as a maintenance engineer and did that for a few months before I saw the advert for a mechanical engineer at the University of Leeds. 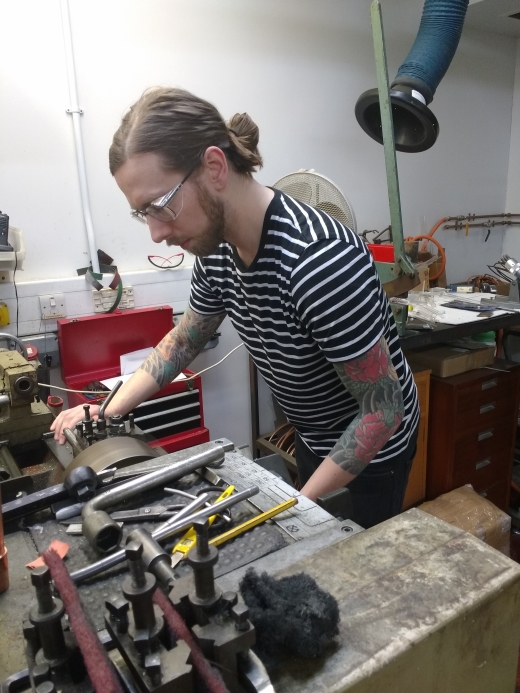 Matthew working at a lathe

That was twelve years ago, and I still really enjoy my job because it is creative. I work with researchers and external groups making bespoke equipment. I do everything from dealing with customers, designing, building, prototyping, ordering, and invoicing. I’m essentially doing a management role as well as a technician’s role. It can be hard work, I’ve got seventeen jobs on at the moment, but so long as you can juggle the work it’s steady away.

I build everything from simple fittings for vacuum cells and environmental air sampling equipment that goes off to Cape Verde and China, to large rigs for upscaling chemical manufacturing—which I’m getting known for. It is hard to describe a standard type of job, which is the main reason I’ve stuck round so long.

Because I’m dealing with chemists not engineers, I get a lot of questions about materials. They’ll have a rough idea of what we’re trying to achieve but they won’t necessarily know quite how to get there. I don’t know a lot of the chemistry but in some ways that is useful as I have to ask a lot of questions too: Will the chemicals be corrosive? Will it be under vacuum or under high pressure? The most difficult part is when you’ll be halfway through a job and they come and want to alter the design. The worst part is when they come and say, can you make this hole smaller? I’m good at making things bigger, but not necessarily smaller!

When I started here there were two of us in the Chemistry workshop. The other technician retired about six years ago. Since then I’ve been by myself, which is fine for me. Not everyone likes it, but I’m quite happy. Sometimes it would be nice to have somebody else there. However, I don’t think it’ll change; since I started here technician levels have gradually dropped in Chemistry. Everyone’s getting older and older and not getting replaced.

Looking back, I would have maybe liked to go on to university. I’d have studied mechanical engineering, but would it have got me any further? Maybe, maybe not. I don’t so much regret it, but it would have been an interesting thing to do. I have debated doing it part time but I’m at the age of mortgages and stuff. There is still time.

Matthew on his bike

Work-wise, I have got myself in a tricky situation, I love the job, but I don’t want to do the same thing for forty years. If I was to do anything else, it’d be abroad, probably Australia. My girlfriend used to live there so she’d quite like to go back. There’s quite a lot of university technician roles out there and work in the mining sector. The better weather is very much appealing to me for cycling.

When on two wheels these days, I stick to road biking over mountain biking, as my joints aren’t quite so good and falling off takes longer to heal! This year I’m planning a cycling trip to Majorca in spring with my partner and a couple of mates - it should be great. A lot of people in Chemistry are aware of my cycling and will pay a visit to my workshop; I’ll help with their seized seat post and they’ll help with my beer supply. Their problems are generally much easier than being asked to make a hole smaller...