The names of twenty-five men from Leeds who served in the Great War have been added to the University’s Brotherton War Memorial. 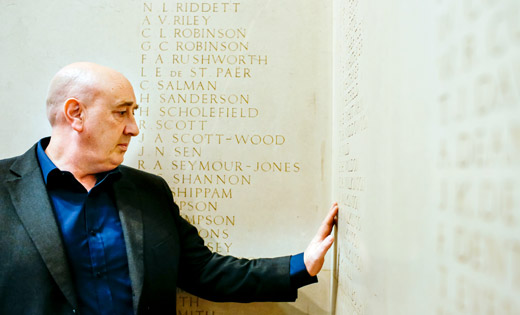 The stories of the men, who all had connections to the University, were uncovered by community researcher David Stowe, who has been working alongside academics to explore the ‘Leeds Stories of the Great War’, part of the University’s Legacies of War project.

When researching the names currently on the memorial, David discovered a number of men who had not been included on the original roll of honour. The names of these men will now be added to a specially commissioned memorial and commemorated in a re-dedication ceremony, which will be held on Wednesday 22 October 2014.

The new names include Second Lieutenant Douglas Knowles Day, who had joined Leeds University Officers’ Training Corps and was 21 years old when he died from wounds received at Gallipoli on 19 November 1915. Also listed is Alexander George Rosamond, of the Canadian Light Infantry, who was a student at Leeds and captained the University football team. He died leading his company into action on 15 September 1916.

David Stowe said: “It remains a mystery why these names were not included on the original roll of honour, but the stories that have unfolded are remarkable. They all served in the Great War, and whilst not all deaths were the result of action or active service, they are no less tragic following accounts of such bravery and courage. It’s been both fascinating and a privilege to learn more about these men.”

Sir Alan Langlands, Vice-Chancellor of the University of Leeds, said: “The discovery of several missing names has revealed a number of poignant and touching stories that we wish to mark and remember. Rededicating the roll of honour is a fitting way of commemorating these men, the Centenary of the First World War and all those who lost their lives.”

The University of Leeds War Memorial is situated outside the entrance to the Brotherton Library in the iconic Parkinson Building. The memorial was originally installed in November 1951 when the Parkinson Building was opened, and consists of eighteen panels which bear the names of 328 men and officers with connections to the University. Many of the faculties are represented, along with past and present members of the Students' Union, Officers’ Training Corps and Cadet Training School.

David Stowe used a variety of sources to research the men, from local newspapers and old University journals through to central databases such as the Commonwealth War Graves Commission register.

David continued: “We’ve managed to establish a more complete picture and gain some more insights into the part played by the University of Leeds in the Great War, which offers a sometimes grim but fascinating insight into a nation at war at the local level. This is also a special and distinctive memorial because of its sentiment of equality, in that no special treatment was conferred on the dead and no rank or status is given.”

Professor Alison Fell, who leads the Legacies of War project, added: “Our research has revealed the diversity of the staff and students who lost their lives during the war. Like all those associated with the University today, they came from all walks of life and from all over the world.”

The ‘Leeds Stories of the Great War’ project has explored the role of the University of Leeds in the war effort and the wide range of war work carried out, from training of men and women in agriculture and interpreting through to research into munitions production and chemical weapons development.

An exhibition of the findings will be displayed in the Parkinson Building in October, to coincide with the rededication ceremony.